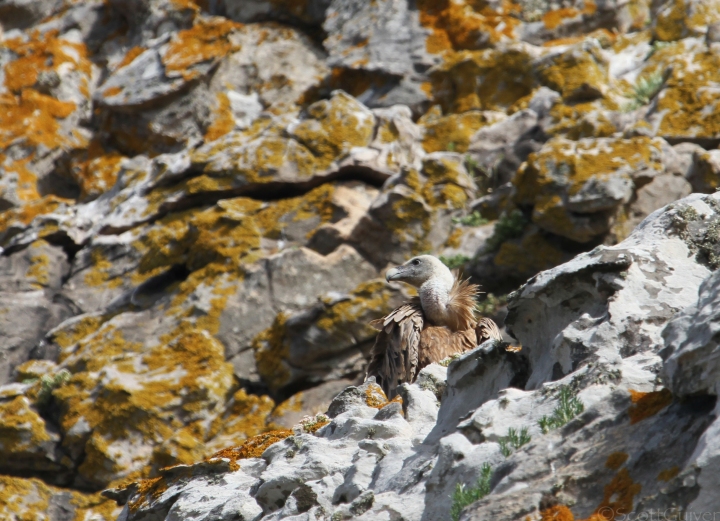 Griffon Vultures are quite massive, an adults wingspan can be anywhere between 7.5 and 9 feet (2.3 – 2.8 metres).  I am used to seeing these birds in nature documentaries on the plains of Africa but they are still here in Europe too, and that’s pretty cool. As they cruise the altitudes on impressive wings they seem to be masters of the sky, but life isn’t without it’s dangers being a Griffon, threats from poisoning and from wind turbines ensure that conservation measures are required.

As I stepped on to the tarmac at Jerez airport , my skin suddenly wrapped in warmth, I looked up to admire the blue sky and incredibly I saw what I had come here to see. Filled with happiness and excitment I suffered from a rare infusion of over-confidence, I  let myself think that this was going to be easy!

The opportunity to have a little break in Andalusia  to see these gargantuan birds and hopefully photograph them was a very exciting prospect for me. But if there is a difficult path to an otherwise easy to reach destination I know which way I’ll go. There are public feeding stations for the Vultures and there are guidebooks telling you exactly where to find them, but where’s the fun in that!?

I had a week to chill out, go birding and explore the beautiful Andalusian countryside and coastline. It was the end of May and the temperature was in the high twenties and low thirties, mosaics of flowers carpeted the meadows and graced the verges, it was a heavenly place to be.

I saw Griffon Vultures gliding on thermals everyday right across the region, every time that I was anywhere near a rocky outcrop I scanned with my binoculars hoping to find a nesting colony. On the penultimate day I started to worry a little bit, I’d seen some amazing birds but I hadn’t found a colony or got the photos of Vultures that I so badly wanted.

That evening I made my dinner early and scanned the Spanish equivalent of an ordnance survey map looking for the most likely place to find my colony. I decided that the contours near Bolonia looked good..and then I cheated..I googled it just to make sure, the prognosis looked good.

My alarm went at 4am the next morning, breakfast, shower, packed lunch made and out the door into the hire car and onto the deliciously empty motorway. The sunrise creating poetic scenes across the Andalusian countryside, it felt good to be up before the rest of the world.

On arrival at my destination I decided to head straight for the rocky outcrop on the highest peak, about half way up the mountain road I stopped and scanned. A tiny looking (see above photo) but perched Vulture bought some of my earlier confidence back! I kept my fingers crossed and drove the car as high as i could drive it then I got my gear together and started to walk. It was still early morning and thoughts of another bird that had captured my imagination popped into my head. Then right on cue as I answered the call of nature, whilst enjoying an amazing Spanish vista, a song echoed amongst the rocks. I knew what it was so I didn’t waste time doing up my fly and I peered out from behind a rock to see a resplendent Blue Rock Thrush sitting on the wires that went over the mountain and beyond. 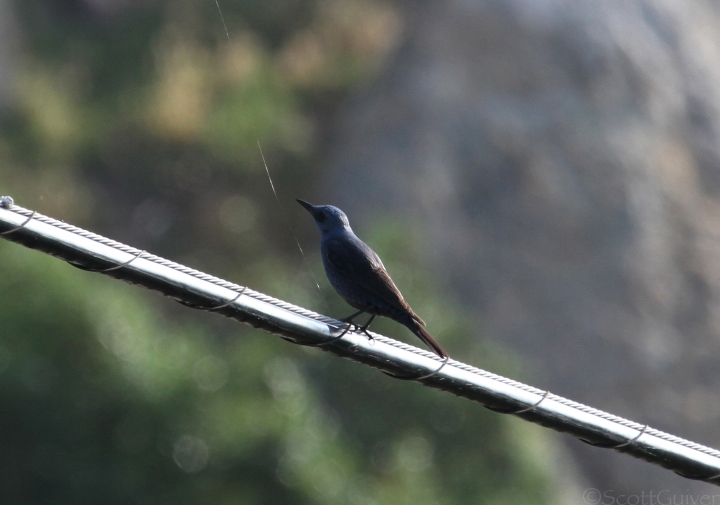 It turned it’s head and spotted a strange my man with his flies open and flew far off to the left, then something caught my eye over to the right, it was another one. Things were starting to get exciting. It was also starting to get quite hot, but there was no time to apply sunscreen or drink water, I wanted to get a shot of a Blue Rock Thrush on a rock! 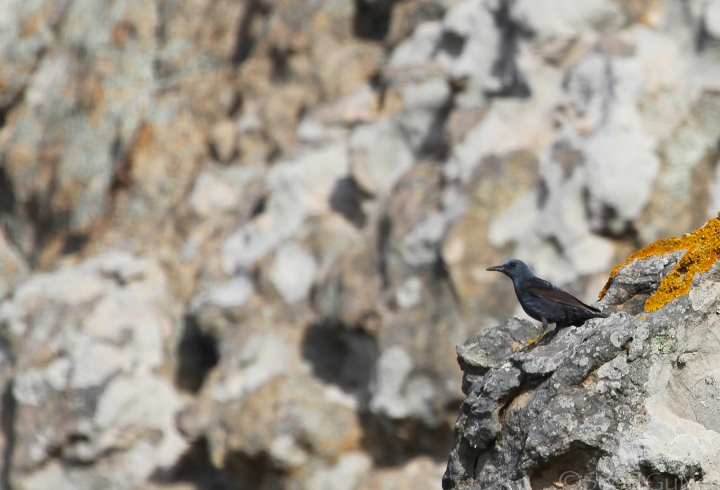 I followed with camera ready as the thrush disappeared behind every available rock. There seemed to be a pattern, it would disappear behind a rock for ages making me believe that it had vanished completely then as soon as I lowered my camera it would perch on top of a rock for about a second then disappear again. I wised up and waited for my one second window of opportunity. With fingers twitching on the manual focus ring, arms attempting to steady with the weight of the lens, the bird perched, I focused and shot. It wasn’t the closest of views but it didn’t matter, I was well happy.

As I turned revelling in my success a bloody great Griffon Vulture soared straight above me, I reached for my camera faster than Billy the kid. 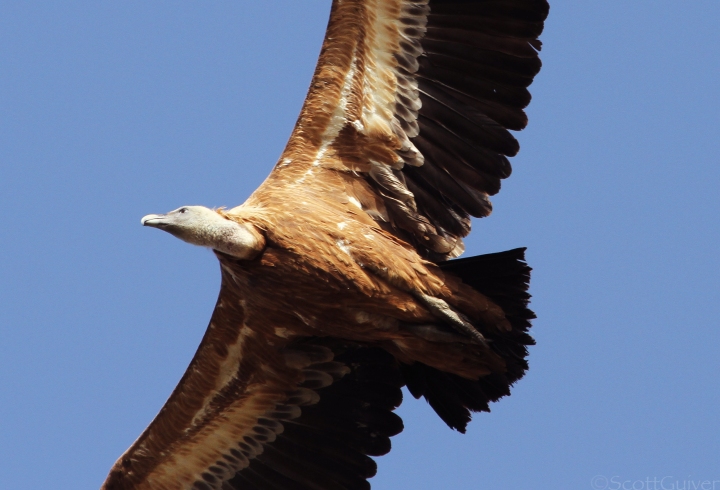 It was joined by another..then another..Griffon central! I spent a good couple of hours giving myself neck-ache watching these beautiful and magnificent creatures. It was worth getting up at a ridiculously early hour for an experience that I’ll never forget.

The Cadiz region of Andalusia is awesome for birding all year round but is particularly good at migration times in Spring and Autumn.

I stayed here in La Roche near Conil de la Frontera for the duration of my stay. This villa is ideally located near the coast and is within easy reach of all the best birding spots including Doñana and also other areas of interest for tourists and birders alike. Prices are cheaper in Spring and Autumn. It has four bedrooms, spacious kitchen and lounge and of course your very own pool. It’s a great villa for group or family trips. I had it all to myself, it was an absolute luxury!

2 thoughts on “In search of the Griffon..and a blue thrush”