Maybe I had a lot on my mind last year, I seemed to spend more time looking at the ground than I normally would, maybe years of wearing binoculars around my neck had caused it to weaken and refuse to carry the weight of my head anymore!? Who knows, but the upshot was that I noticed more of what was going on at ground level. This included many sightings of beautiful Grass Snakes, but with their powerful senses and my not so deft footsteps, they always seemed to be avoiding my camera lens by disappearing at great speed through dense undergrowth. But with great determination the voice in my sagging head made a vow to get some decent shots of this gorgeous snake in 2016.
So it was that just over a week ago signs of spring started to appear, including sunshine that had warmth to it. The excitement of the change in seasons in the northern hemisphere is at least doubled when the transition is from winter to spring, life and colour gradually emerge from the darkness. I can feel my senses starting to come out of hibernation without even realising that they’d gone into hibernation. A feast of life and interactions starts to build, sounds, colours and smells, as pheromones and endorphins
enter the atomosphere and get tangled up with text messages.

So it was time to rein in the excitement, lower the heart rate and tread like a modern day nature ninja on the little trodden path next to the sewage works.
As I turned off the lane and reached the start of the path…I saw that it was covered in dry leaves…..”shit!”. The path is about 50metres long, it took me about half an hour
to get three quarters of the way down it, but success, a grass snake stretched out in the sun!. As i reached round in ultra slow motion for my camera, the snake vanished and a dog
came belting down the path folllowed by two people. There was quite a lot of silent swearing going on at this point, but at least i knew that this was the spot.

Sunday the 3rd of April, the forecast is sunshine, nice one, time to go to the sewage works…as you do. This time I scanned the lane up and down before entering the path and I’d only taken two ninja like steps before my eyes met those of a large grass snake and in one slow fluid movement I reached for camera and crouched down. My model obliged and i retreated with stealth so not to disturb.
My smile was wide! 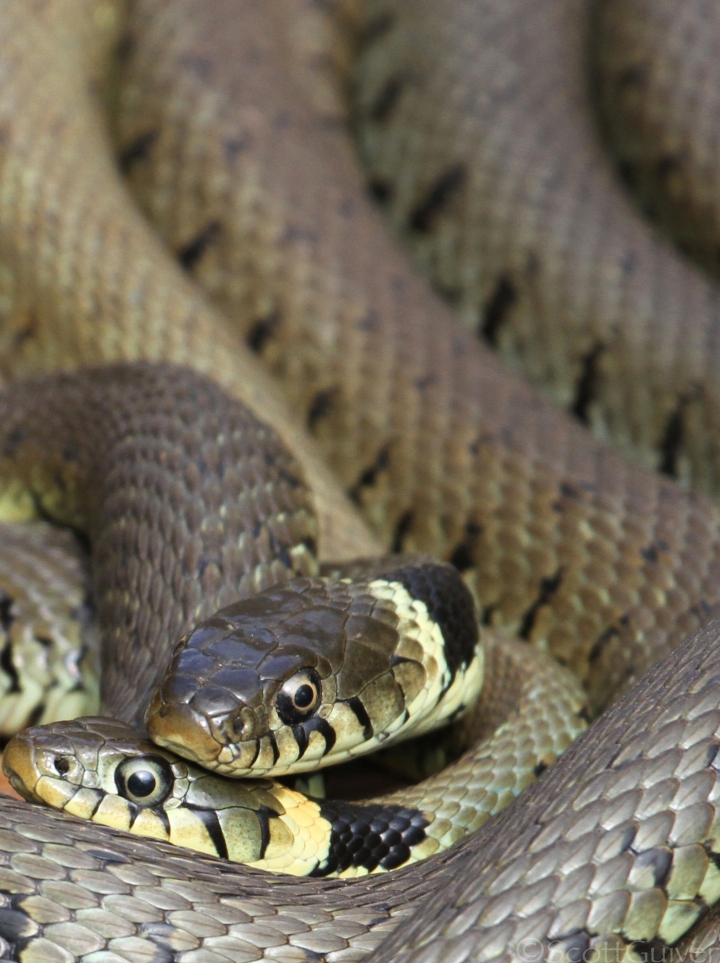 Friday the 8th of April, I have a day off work, the forecast is sunny spells, I can’t resist going back. So this time I get three quarters of the way down the path again and hope is dissipating, then, mouth drops open and heart stops. 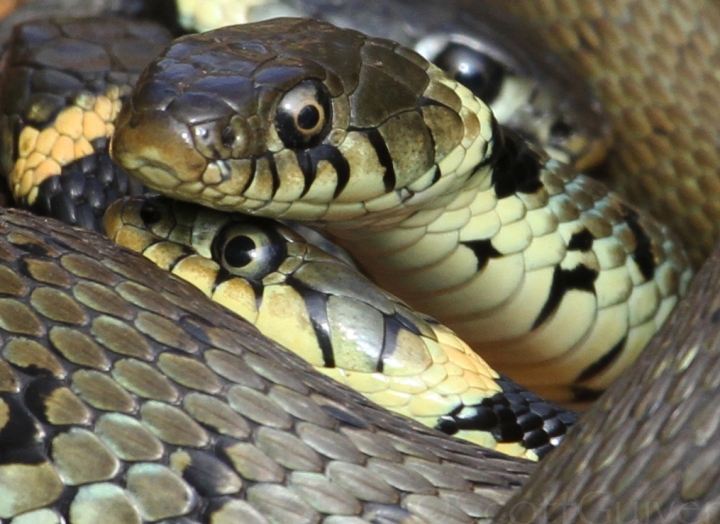 A writhing mass of grass snakes (actually there were four) mating in the middle of the path.

The feeling of euphoria has to be controlled, for one I want to get some unblurred photos and two, I don’t want to put these beauties off of doing their thing, the next generation of grass snakes is at stake! I get my shots and again I retreat with stealth. This time I have a wider smile and I may have even skipped along the lane, alright I didn’t but I felt like it.