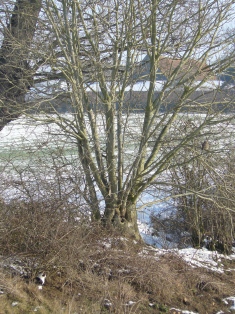 The Owl and the Pussycat – last winter in Suffolk 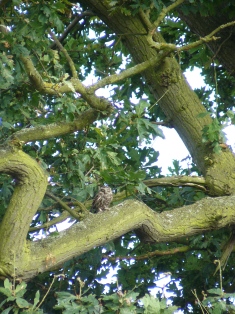 A young Little Owl from the 2012 brood in Suffolk. 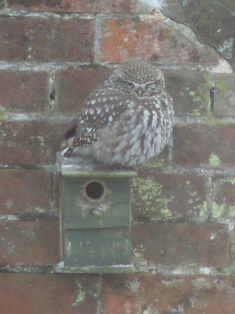 Little Owl – seen through the kitchen window in Suffolk

Firstly , I must point out that the close-up of the adult Little Owl was taken through my old kitchen window (and it wasn’t too clean – the window, not the owl). Secondly , observational skills might be required for the other two photos – I don’t own a digital SLR – I have asked Santa for the last five years with no success , so ,  I’m now starting to think that he might not exist or has been hit hard by financial woes!?

I’ve recently moved to Cornwall. For the last three years I was fortunate to live in beautiful Suffolk , very close to RSPB Minsmere.

I have a particular fondness for owls and everyday in the surroundings around my house , I was in the company of Tawny Owls , Barn Owls and Little Owls.

The Tawny Owls , I would see and hear in the evening and the night time. The Barn Owls would generally make an appearance around dawn and around dusk , and sometimes I would hear their spine chilling screeching during the night.

The Little Owls , however , always seemed to be there , keeping me company. As I tended to my vegetables and my chickens , or just chilled out in the garden , they would be there , snoozing in the sun , calling to each other , watching me or getting harassed by the cheeky Jackdaws.

The Little Owls , I miss them  like I miss old friends.

2 thoughts on “The Owl and the Pussycat”